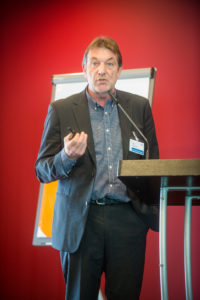 More information on Toon can be found in the LinkedIn profile.

In antiquity, unlike in our times, not much was known about the mechanism of fever in disease and therefore was considered a disease on its own. In periods of medicine with mystical explanations, supernatural forces were blamed. Consequently, it is not surprising that the goddess Febris was held responsible for fever.

Febris is the Roman Goddess of fevers, who can bring or dispell sickness. She is the fever personified and her name means just that: “Fever” or “Attack of Fever”. She may have been especially a Goddess of Malaria, which was notoriously prevalent in ancient Italy, especially in the swampy regions as the disease is transmitted by mosquito, and she was given offerings by her worshippers in the hopes of being cured. The classic symptoms of malaria include periods of fever, lasting from four to six hours, which come in cycles of every two to three days, depending on the specific variety of parasite; this would explain the odd phrase “attack of fever”, as it was something that came and went, and would support Febris’s links with that specific disease.

At any rate, malaria was all too common in ancient Rome, and the Romans knew it; they also had some idea what caused it and how to avoid it — Varro, writing in the first century BC said that when building a house or farm “especial care should be taken to place it at the foot of a wooded hill where it is exposed to health-giving winds. Care should be taken where there are swamps in the neighbourhood, because certain tiny creatures which cannot be seen by the eyes breed there.

These float through the air and enter the body by the mouth and nose and cause serious disease”— which is a pretty good guess considering that germs would not actually be seen by the human eye until some 1700 years later, when the Dutch scientist Antony van Leeuwenhoek “discovered” bacteria with an early form of microscope (incidentally he called the little buggers “animalcules”; and if you read his account, I guarantee you will want to immediately brush your teeth). The Romans were quite aware of good hygienic practices and incorporated them into their city planning and public works projects, for example by constructing great sewer systems to funnel waste away, by draining swamps any chance they got, and of course by building many bathhouses.